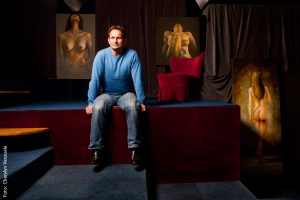 Gregor Wosik was born 1955 in Oberschlesien/Poland, and loved painting and drawing since he was a child. His talent was discovered very early and improved through additional art studies. Already in the age of 16 he was able to increase his budget by painting portraits, landscapes or wall paintings. Since 1984 he is living in Germany and works as a free-lance artist.

Formerly he was inspired by the old masters, his favorite idols are Caravaggio and Rembrandt, and he learned a lot by copying. Outgoing from this, he developed his own typical style in various oil and acrylic paintings. In his hometown he is part of the artist group “Blaue Rheydter”, and has regular exhibitions. 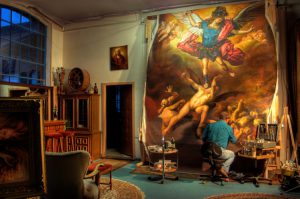 Conspicuous is his inclination for large-sized paintings, that is why he likes mural painting and is very happy with the fact, that street painting nowadays has a real renaissance. On the pavement he can realize his visions of large paintings. Since about 3 years he specialized on 3D paintings, which is illusionary painting on the street. He works successful for various agencies and big companies all over the world, who want to transport their advertisement and brandings through 3D street art. 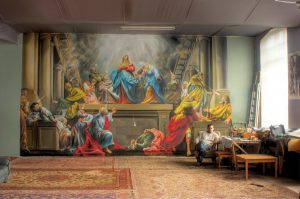 2008 he had an own exhibition in Wien, to present the modern way of street-art. And 2009 he made a sketch of his vision, a real large 3D picture, and it was realized by 6 European street painter in 4 days in Rijssen/Netherland. The result was a picture 750 m², which was officially added to the Guinness book of records. More of Gregors records. 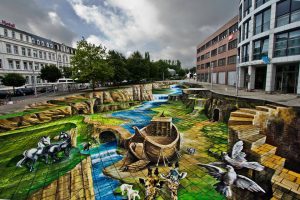 I started to paint as I was a child in Poland. My example was a television series about painting, so on Sunday morning, when my family went to church, I watched television and painted. I was able to sell my first picture at the age of 13, mainly landscapes. Later I made a career as soccer player, and at the age of 30 moved to Germany.

There by accident I visited a city called Geldern, where every year takes place a street painting festival. This was a sensation for me, because all the people were painting in my favorite way, in XXL. So I saw the chance, to use a huge canvas the pavement. And from this on I developed myself as a street painter, was so proud to win the festival in Geldern and then even in Grazie de Courtatone. I can call myself Master of Madonnari. First of course I was a classical 2D copyist. My favorite artist is Rembrandt, and I like to paint in his style. Nowadays we get more and more requests for 3D paintings, for which we sometimes still use chalk. 3D for me is even better in comparison to 2D: first because I can paint bigger and bigger, second, because my eyesight is getting worse, so copying is hard work for me, third, I always used to have too much phantasy for copying, in 3D I can make designs by myself and paint like I want, and forth, I can use one of my strongest talents, the talent for improvisation and surprise the spectators and myself. 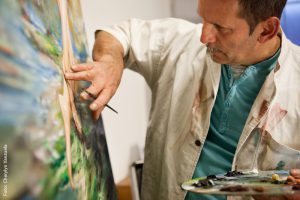 My technique for 2D chalking is: first I make a grid, then I start throwing color on the pavement, or canvas, – without thinking, just using the inner voice. At the end it looks often very strange from near and wonderful from far away. The only rule you really have to obey, in 2D and 3D and any paintings — it is most important to watch the light and shadow. When you set light and shadow on proper places, the painting is correct in the end.

The themes of my paintings 3D, 2D, chalking, oil paintings — have often one thing in common: I have to admit, I love “beautiful” objects, humans, animals, technical things, landscapes. For me it is very hard to paint something ugly. However, I have done several paintings which are dealing with the theme “peace“, because this is very important to me.”